As a ready workforce of expert MSK clinicians, with the potential to provide much needed additional capacity to the NHS, the panel concluded that early involvement of osteopaths within NHS MSK services could significantly improve service delivery and patient care.

The panel’s members investigated current examples of where osteopaths work within the NHS, their contribution to multidisciplinary teams and impact on patient care, and the barriers and challenges on the ability to increase integration of the profession within the NHS.

Their findings have been published in a report ‘The role of osteopaths as allied health professionals within the NHS’ and cites a ranges of examples where osteopaths have worked within NHS settings – varying from inclusion in primary care multi-disciplinary MSK teams, as First Contact Practitioners and in secondary care.

Commenting, Professor Adrian Newland CBE said, “Successful models of osteopathic practice and multi-disciplinary MSK practice already exist in the NHS however such arrangements need to be nurtured and planned for the long term. The involvement and support of doctors and commissioners is critical for teams to function effectively.”

Sue Brown, Chief Executive, Arthritis and Musculoskeletal Alliance (ARMA) said, “For everyone living with a musculoskeletal condition to be able to access the right care at the right time we need a wide range of professionals working in multidisciplinary services. This report helps identify where osteopaths, as AHPs, can contribute to this vision of excellent MSK care.”

Maurice Cheng, Chief Executive of the iO said, “The NHS Long Term Plan recognised the need to move to a new service model in which patients get more options, better support, and properly joined-up care at the right time in the optimal care setting.  These ambitions were also echoed within the recently published NHS People Plan, calling for the health service to make effective use of the full range of our people’s skills and experience to deliver the best possible patient care.

Osteopaths are particularly well-placed to support these ambitions and provide the capacity and expertise to help support the delivery of patient care and outcomes. At this current time, when the demand on MSK care is exceptionally high, we are calling for osteopaths to be used more widely to provide early assessment and intervention for patients. Osteopaths are highly trained, regulated clinicians – the potential for a readymade workforce into which NHS MSK services can tap into.” 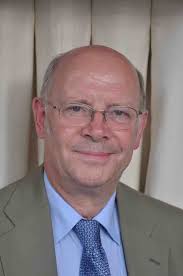 Adrian Newland is Professor of Haematology at Barts and the London School of Medicine and Dentistry, and Honorary Consultant at Barts Health NHS Trust. He is ex-President of the British Society for Haematology, was President of the Royal College of Pathologists from 2005–2008, and President of the International Society of Haematology (ISH) from 2014 – 2016. He is currently advisor to NHS Improvement on Pathology and clinical advisor to the Transforming Cancer Support Team for London. He chaired the Professional Performance Panel for the RCPath and is a member of RCPath Consulting and in that role has reviewed many hospital pathology services in the UK and Ireland. He is a member of the World Health Organisation’s Strategic Advisory Group of Experts on In Vitro Diagnostics. 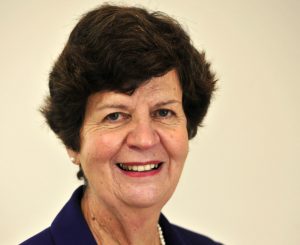 Christina Edwards has a wide experience of the NHS and the Department of Health. She qualified and worked as a nurse in acute settings, then worked as a health visitor. Previously she worked abroad, has her own business and had a varied career in administration. In 1992 she led a Department of Health scrutiny into unnecessary paperwork and bureaucracy and later served on several inquiries. In 1998 she became Regional Director of Training, Education and Nursing, including responsibility for two Deaneries in the Northern and Yorkshire Region. Christina was Vice Chairman of Sue Ryder Care for nine years, and serves as a Trustee on the Cavell Nurses Trust. Christina was a Registered Nurse member and the Deputy Chairman of the Governing Body of NHS Nene Clinical Commissioning Group from 2012 to 2017. 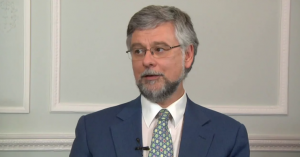 ‘The role of osteopaths as allied health professionals within the NHS’ 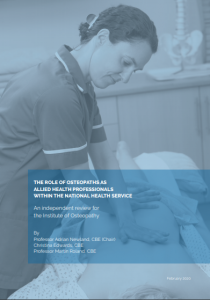