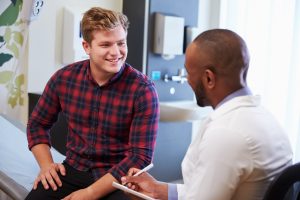 Osteopaths have been featured regularly in the media recently. With the rise in working from home during the pandemic and beyond, people are not moving as much, which has contributed to a rise in injuries. Osteopaths say that they have seen an increase in the numbers of people coming to see them with injuries such as bad backs. The once daily exercise involved with commuting such as walking, or cycling is no longer there. On BBC London this week, osteopath Robin Lansman spoke about why injuries compounded by working from home are becoming more and more common and what can people do to avoid it.

‘Variety is the spice of life to try and get upper and lower body working, rather than just walking for example, but doing a mixed bag of exercise, nothing too intense to start with and generally making changes to the workstation is really important,’ he says. He also advises that with huge changes in our lifestyles, we need to be more aware of the hidden consequences.

Combatting aches and pains in winter

Another concern in the news has been the impending cold weather which can cause slow, tender and achy joints. Osteopath Kemmy Gichaba said that there were some natural methods to reduce these aches and pains. Speaking to the Daily Express, he gives seven top tips to help naturally manage the symptoms. One of the tips was to increase exercise and movement. Kemmy explains: ‘Over the winter months it is more common to spend more time indoors which can naturally result in you moving your body less, as well as less motivation to go to the gym or take part in exercise.’ He suggests swimming in a warm pool, stretching with yoga or Pilates, brisk walking, and gentle weight training to keep your body active and fit which can help to combat aches and pains.

Stretching to reduce back pain

With more and more people suffering with painful back pain, osteopath Anisha Joshi shares the six best lower back stretches proven to reduce pain in this month’s Hello Magazine. She advises: ‘I always say prevention is better than cure: taking care of your body reduces the likelihood of suffering from debilitating pain, including lower back pain, and allows you to keep doing what you love for longer’. She says working from home means regular stretching is even more important since it is easy to lose track of how long you have sat in one place. She goes on to suggest stretches such as knee to chest, plank, glute bridges and yoga poses.

The Daily Mail recently published a story about improving posture and boosting energy in a matter of seconds after sitting at a desk. Osteopath, Brendon Talbot, says performing a ‘trapezius twist’ each time you stand up from sitting down can transform your health by repairing the vagus nerve. Brendon also warns about the ‘forward head’ posture which is often exacerbated using devices such as computers and smartphones.